This is a good place to learn about our hardworking team, but we'd love to get to know you in person! 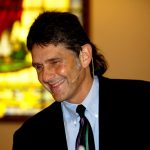 Rev. Eddie Hill (aka Preacherman) - Eddie arrived at Sharon in July 5, 2002, and has been immersed in the Holden Beach and Brunswick County communities from the get go. A native of Atlantic, NC, this area has felt like home in many ways – the salt life, the dialects, the fishing village culture. A 1995 graduate of Duke Divinity School, Eddie believes in rolling up his sleeves and meeting folks where they are.  His love for people of all ages coupled with a big dose of humor and a deep love for Jesus makes folks feel welcome, seen, heard, and cared for when they walk through the doors. Most of Eddie’s off-the-clock adventures are with his wife, Nita, and their four sons. 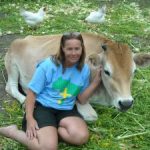 Tracy Hibbard, Administrative Assistant to the Pastor - Tracy was born in Boston, MA,  but her childhood included vast travels from Ontario to Virginia to Germany, with a two-year stint on a sailboat with her family. After relocating from Virginia to her Ash area farm in 2004 with her husband, Bob, she  joined the Sharon UMC team in 2005 and has been committed to serving the pastor and congregation administratively. It’s often said of Tracy that "she goes above and beyond the call of duty." Her specialties include spontaneity, flexibility, computer-related issues, and problem solving. Not only have animals been a big part of her Brunswick County life, but Tracy was also involved in search and rescue work for many year. This mom of four has been grateful to grow in her spiritual journey while faithfully supporting our church…and relishes time with her grandchildren. 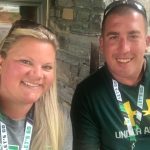 Jimmy and Lauren St. George, Legacy Youth Coordinators - Jimmy, originally from upstate New York but raised in Supply, has been part of Sharon since his own youth days. Our church family has witnessed and rejoiced as God brought Jimmy and "hometown girl" Lauren together and watched their family and faith grow. They first met at West Brunswick High School and connected years later after they had begun their careers – Lauren as a nurse and Jimmy with the Town of Ocean Isle Beach. Their love of the Lord shines through vividly as they parent their girls, and as they faithfully serve the young people of our church and community. 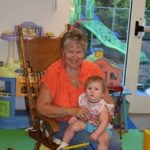 Shirley Huffstetler, Nursery Coordinator - Many babies and toddlers have had "Ms. Shirley" among their first words and memories as she has worked tirelessly as our Little Lambs coordinator for many years. Originally from Gastonia, NC with many years in the business world, Ms. Shirley loves her little people. She and her husband, Mr. Bob, retired to our area and worked with the children’s program together. After his passing, Ms. Shirley continued with the King’s Kids and then transitioned to the nursery. She invests much time – and personal resources –  to be available when the church doors are open for worship and events, and keeping the nursery stocked with supplies and surprises for the children. 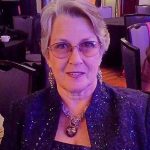 Joanne West, Choir Director - Joanne was born and raised in Jacksonville, FL, with moves later to Miami, Lakeland, FL, and Waycross, GA.  She was a music major at Mars Hill University, with concentrations in piano and voice. Joanne has a wealth of experience in the music world, including working as a public school music teacher and teaching private piano and organ lessons, as well as serving as a church music director, a substitute organist, and a children’s music director, throughout the years in North and South Carolina. She even had a 92-year-old as one of her studio piano students. Joanne was also invited to be an adjudicator for the National Piano Teachers’ Association for which she traveled across several states through the years to judge the progress of students. Joanne moved to Shallotte in 2002 with her husband, Truett, and arrived at Sharon UMC in 2013 to lead our adult choir. Quilting, painting, reading, traveling, and photography are among her spare time interests. 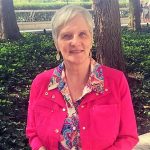 Vicki Bayer, Pianist - Born and raised in Roaring Springs in central Pennsylvania, Vicki received her Music Education degree from Penn State University. She's served as a life-long church musician, as a pianist and organist, for many denominations and settings, including the UMC and the Quantico Marine Corps Base Memorial Chapel. Additionally, Vicki's career included working as a legal library and records manager in Washington, DC. After vacationing with family members at Holden Beach for decades, Vickie happily retired to Oak Island in 2017 to read, play with her dogs, and, thankfully, share her gift of music here at Sharon since 2018! 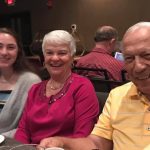 Jean D'Addario, Organist - A native of Troy, Ohio, Jean graduated from Miami University (Ohio) with a BS in Education and received a MSA in Administration from Central Michigan University. Her career includes teaching and school administration in Pennsylvania and New Jersey, followed by studying the organ at Douglass College (Rutgers) and at Westminster Choir College in Princeton, NJ. Jean served as organist in churches in Freehold, NJ and in Hillsborough, NJ before moving to Holden Beach. In addition to working at Southeastern College until her retirement, she has served Sharon as organist since 2003. Jean’s free time is often filled with adventures with her two children, two grandchildren, her husband, Ben, and her bonus family with him. 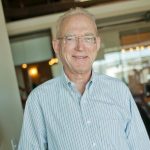 Henry van Driel, Organist - Henry’s career spans many years of customized customer service in sales, sales support, and daily operations. Account management has been an integral part of his success through the years. Outside of work, Henry loves spending time at the beach with his wife, Linda, walking, reading, fishing, and people watching. His appreciation for music, and specifically playing his Hammond organ since 1972, led him to serving as a church organist for over 43 years before calling Sharon his church home in 2016 and becoming a part of our music team. 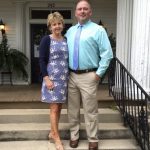 Wayne and Pam, Custodial Team -Wayne is a native of Holden Beach and Pam is originally from Kingsport, Tennessee, but both are happy to call Holden Beach their full-time home now. In their spare time Wayne enjoys the outdoors, while Pam is an animal lover. They both take full advantage of coastal living!